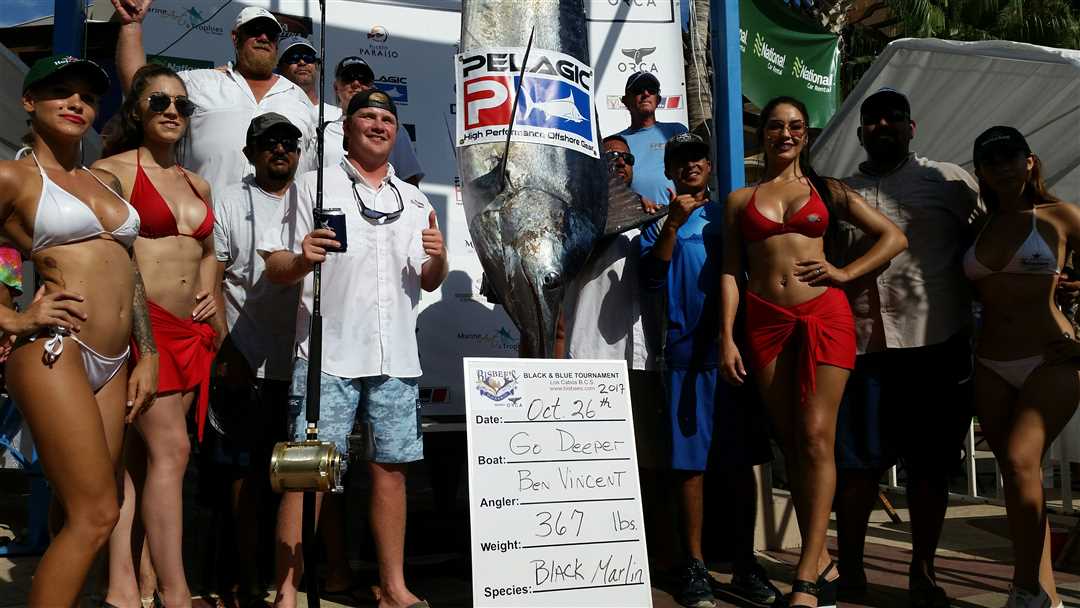 Today is the final day of the Bisbee Black and Blue fishing tournament and it has been tough for some and exciting for others as it usually is. With a field of anglers both novice and professional from around the world competition is fierce.

Day one saw team Ten Brothers aboard the 32 ft. local charter boat Dream Weaver go into the lead with a 485 LB black marlin; they also boated another fish this same day that was just short of the mark at 298 LBS, nevertheless the other fish that came to the scale on day one could not top their black marlin.

Day two saw more action with several qualifying fish making it back to the dock; the largest being a 421 LB black marlin aboard Pocket Aces, but because this boat only entered the $500.00 daily jackpot, the big money winner on day two was Go Deeper with a 367 LB black marlin by Ben Vincent these guys were across the board effectively knocking out all the other qualifying fish  of day two which were as follows: Liquid Assets 363 LB blue, Team Galati 355 LB blue, Cowboy 310 LB black and Chupacabra had two fish which weighed 326 LBS and 356 LBS respectively, which makes them the overall leader in the tournament but not in the money.

Here is how it works; you have the straight tournament prizes which are allocated on a points system, 1 point for every pound of qualifying fish, so right now Chupacabra has 682 points if you add the weights of their two fish. So, somebody has to catch a fish larger than 682 LBS today to surpass them and to knock them out of first place.

Awards are given for the top five boats.

The release award, which also pays big money is being lead by Fastball an  82 ft Viking with 1200 points.

It was crazy to see all the big boats piled up just offshore this morning fishing bait and also hoping to catch a big one, which is what Go Deeper was have rumored to have done yesterday; they caught their big fish while fishing bait.

It’s not over yet, we still have a little over two hours to go and there is never a foregone conclusion until the last boat pulls in.