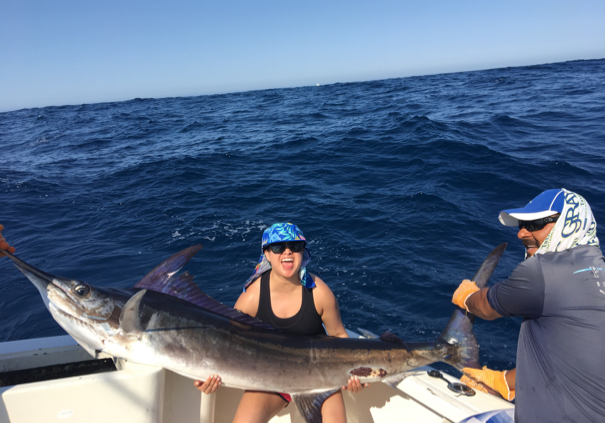 Sun’s out, tongues out! Jennifer Uy from California holds up this striped marlin released aboard the Pisces Tracy Ann.

Very good fishing this week on all fronts, we saw most of the offshore bite at the 11:50 Spot at the beginning of the week to then spread out a bit. As far as inshore fishing goes, we’ve still been seeing the big rooster action. With the bite being excellent, up and down the coast from Cabo along the corridor, almost to San Jose. Species landed included: jack crevalle, amberjack, skipjack, grouper, sierra mackerel, and red snapper alongside the odd mako or hammerhead shark. Small game fishing was very good this week, and that wasn’t the exception on the Massey’s fishing trip with captain Francisco Dominguez, aboard the Panga Tres Amigos they landed three sierra of around 6 pounds each, a roosterfish, a jack crevalle, and four red snapper from 13 to 15 pounds. The snapper were landed on mullet and the rest of the fish on caballito live bait at Pedregalito. 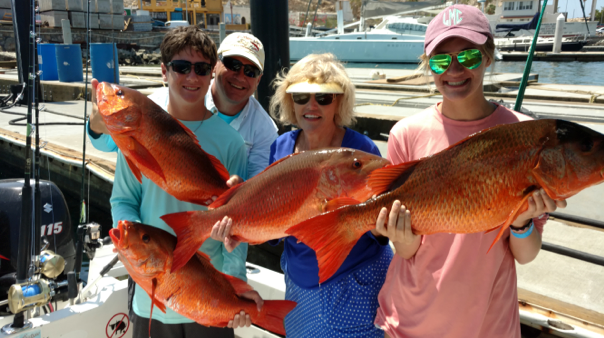 These Massey’s from Texas hold up their red snappers landed aboard the Pisces Deluxe Panga 3 Amigos.

Our top marlin boat this week is undoubtedly the Pisces Tiburon with captain Bruce Monta?o and his deckhand Abraham Castro, on Friday they were involved in an epic battle that went into the night against a blue marlin that wouldn’t give up, and with first time marlin fishing clients. It is quite the story to say the least that will be shared in its own article later this week. On the 13th they also went out with the Gebhard’s from Texas, catching and releasing a striped marlin of around 160 pounds. As well as a blue marlin of around 220 pounds that they released after a two-hour fight. On the 10th under the same deckhand, but with Rosendo Gomez as captain, they released three striped marlin as well as a 30-pound rooster for some anglers from Sussex, England. All fishing was out at the 11:50 Spot, and with caballito as live bait. While the Pisces Tracy Ann and the Pisces Bill Collector came in tied for second place in the marlin ranking. Both boats landed four striped marlin on different days, with the Tracy Ann also landing a 40-pound roosterfish for honeymooners the Uy’s last day on the water. The Bill Collector had a nice dorado onboard for the Gunning’s from Texas. 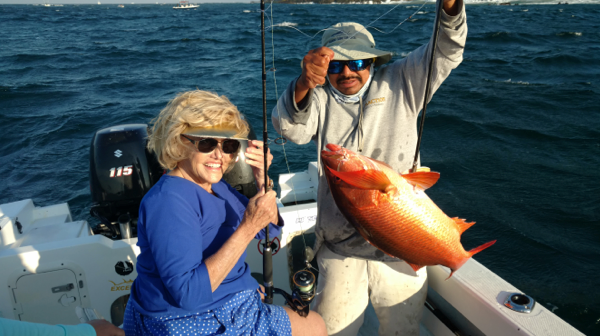 Captain Francisco Dominguez AKA “The Legend” or “Panga Master” of the Pisces 3 Amigos holds up a beautiful red snapper for this happy angler from Texas.

LOCATION: 11:50 Spot, inshore fishing was from the Lighthouse to the Corridor.