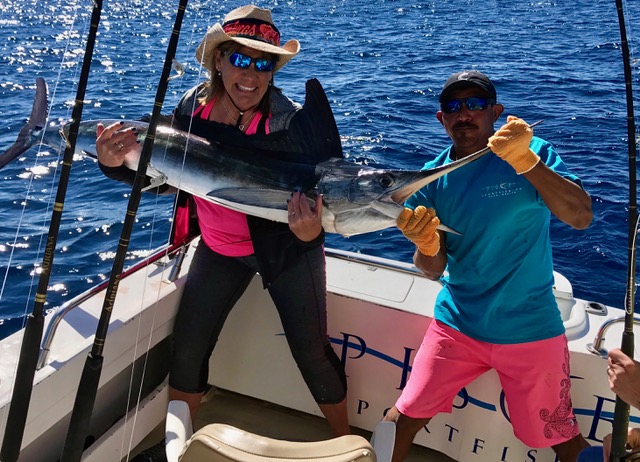 ConnieJo from Nashville, Tennessee is pictured here with first marlin, aboard the Pisces Adriana.

We had less boats go out this week than last, and fishing was hit or miss depending on the day. Yellowfin tuna was our top catch this week with 67% of Pisces boats bringing in tuna in the 15-30 pound range. Fishing remained on the Pacific side over a large swath of fishing spots; each of them producing their own different catches. Inshore fishing continues to be productive and fun with roosterfish, jack crevalle, red snapper, sierra mackerel, skipjack and other species being landed. The most prolific boat this week was the Pisces Rebecca captained by JR Alucano headed out to the Finger Bank near Todos Santos on the 25th & 26th with a group of anglers from Millbrook, New York. On the first day they caught and released six striped marlin in the 125-145 pound range, while on the second day they caught and released 10 striped marlin; they were all caught on mackerel live bait. And they also caught 10 yellowfin tuna from 20-30 pounds on the first day, and 16 tuna on the second day. All the tuna were landed on cedar plugs and feather lures. 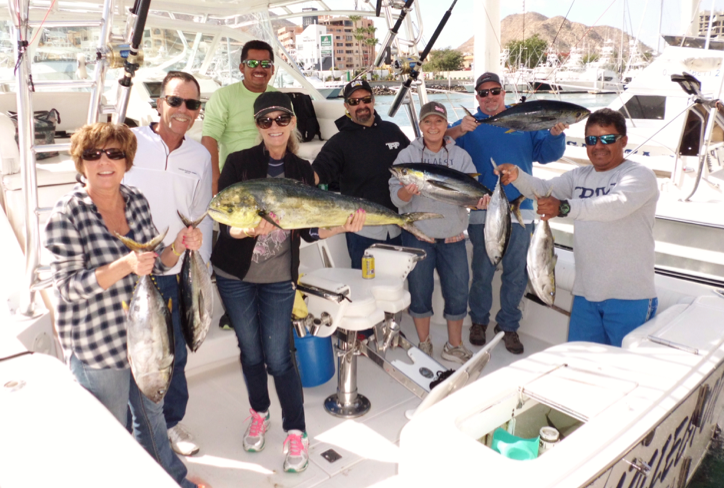 This group of anglers from Arizona is pictured aboard the Pisces Bill Collector with their dorado and yellowfin tunas. (Photo by Oscar Ba?agas).

On the 24th the Pisces Ruthless had a really nice and well rounded Cabo day on the water, with their anglers from spring Valley, California. They caught and released a 130 pound striped marlin, landed four yellowfin tuna of around 15 pounds and a 25 pound wahoo; all of this out about 31 miles from the 180 Spot. While the Pisces Adriana had a really nice inshore day at Migri?o, they caught five sierra mackerel on rapala lures, they all weighed in the 8-10 pound range. They also caught eight grouper, two sea bass and a triggerfish for their anglers from Rochester, Minnesota. While on the 21st we saw a group of fishermen from El Paso, Alabama head out to the Pacific side near Rancho Las Margaritas. They landed a 15 pound dorado, 17 yellowfin tuna in the 15-20 pound range, two sierra mackerel and a 30 pound jack crevalle. 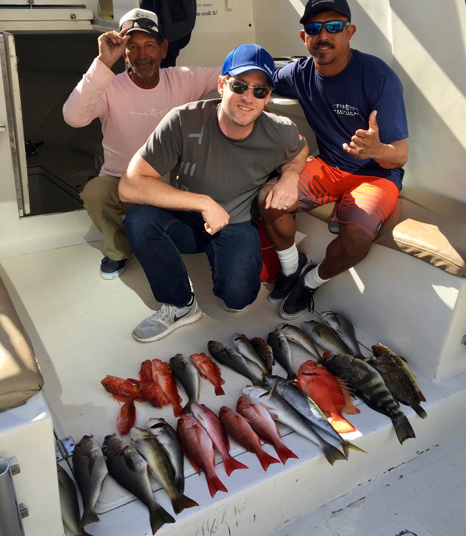 Inshore fishing has been very productive, here we see a range of  fish on the Pisces Adriana.

WEATHER CONDITIONS: Clear skies some days, with partly cloudy to cloudy others. Seas were calm some days and moderately rough on others. High air temperatures this week were in the los 70’s.