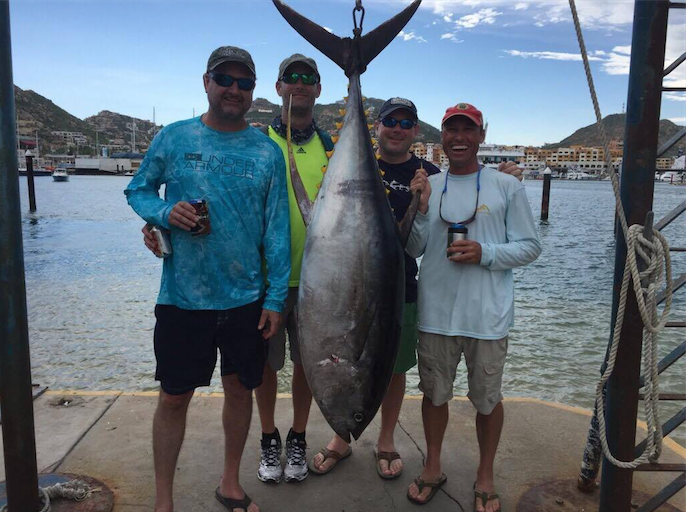 175lb yellowfin tuna caught on board the Pisces Valerie, for this group of anglers from Georgia.

BILLFISH: The numbers are down and we had really few boats out this week. The fishing grounds have also been extremely spread out, it was difficult to find one particular spot that worked well. To make matters more difficult we had rain at the beginning of the week which messes up the water afterwards, with its large amounts of rainwater flowing out to sea from previously dry riverbeds. And we also had a full moon, which leads to a lot of the fish feeding at night and not wanting to take lures or bait in the daytime hours. Will all that having been said, the week started out well for our mostly Texan anglers on the 20th. The Pisces Tracy Ann captained by Julio Castro and deckhand Abraham managed to catch and release a striped marlin of around 140lb. As well as catching two blue marlin one of which was released, unfortunately the second marlin weighing 276lb died before release. These were all caught on caballito live bait at the Herradura spot. The Pisces Rebecca captained by Luis Cota and deckhand Cesar put another group of Texan anglers on a sailfish that was caught and released. As well as a blue marlin estimated at around 230lb released, both fish caught a few miles from the Arch. On August 23rd the Pisces Andrea went out with solo angler Joe from Oklahoma City, Oklahoma. Captain Orlando Murillo and deckhand Silvestre didn’t disappoint, catching and releasing a sailfish estimated around 100lb. They also caught and released two striped marlin in the 130lb range. All the fish took caballito live bait and were landed at Destiladeras. Later in the week we saw a nice day for the Pisces Bill Collector, catching and releasing a striped marlin, as well as a blue marlin. The fish were landed at the San Jaime Bank, for a group of anglers from Monterrey, Mexico. 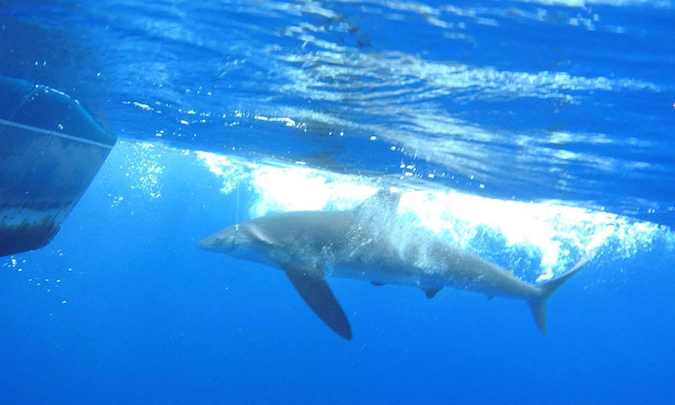 Large silky shark coming in for release on the Pisces Valerie.

OTHER SPECIES: As far as other species went this week we saw a pretty even split between yellowfin tuna and dorado. With species ranging from roosterfish to silky sharks, as well. The Pisces Valerie, took out some anglers from Marietta, Georgia and they had a blast. They had quite the exciting double hookup, with a 175lb yellowfin tuna (largest of the week) on one pole and a large silky shark on the other. Captain Roberto Sandez and deckhand Roberto Padilla expertly maneuvered both boat and anglers to avoid contact between the two fish. In second place this week on the yellowfin tuna tally was the Pisces Knot Workin, captained by Tito Olascoaga and deckhand David. They landed a nice 166lb yellowfin out at San Jaime, for the Buckley family from Tennessee. Rounding out the other species, we saw the Pisces La Brisa land four dorado and a nice wahoo this week. While the Pisces Ruthless had a striped marlin and eleven dorado (five released). And finally the Pisces Panga Pichurro had a nice 25lb dorado as well as a 25lb roosterfish that was caught and released just off the Old Lighthouse. 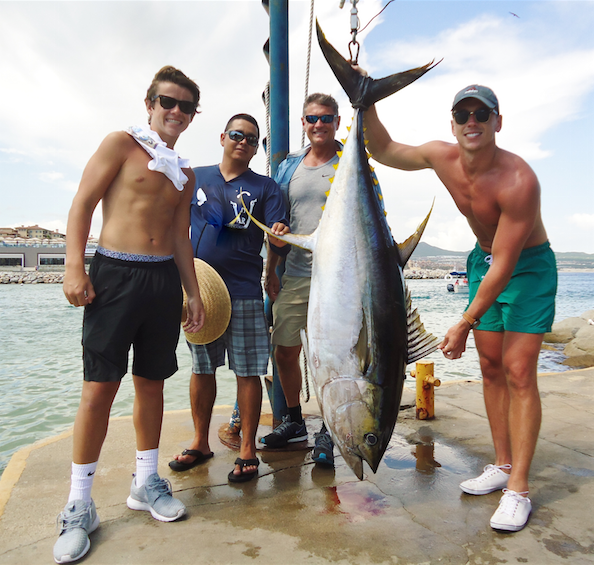 166lb yellowfin caught aboard the Pisces Knot Workin for this group of anglers from Tennessee.

LOCATION: Very spread out this week, from San Jaime on the Pacific to Destiladeras on the Cortez side.

WEATHER CONDITIONS: Rain on the 20th, seas varied between calm and moderate. 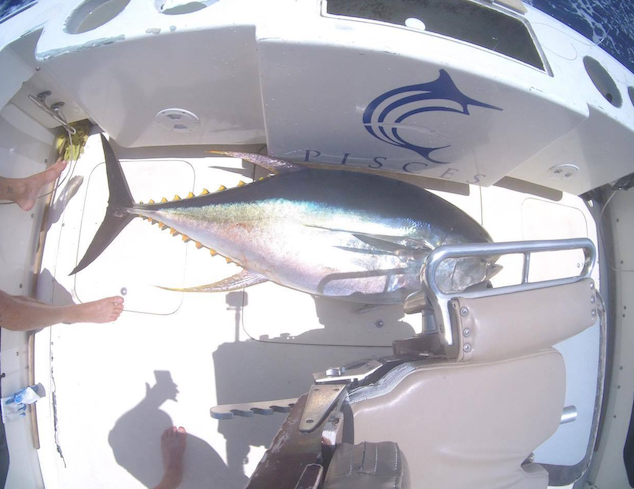