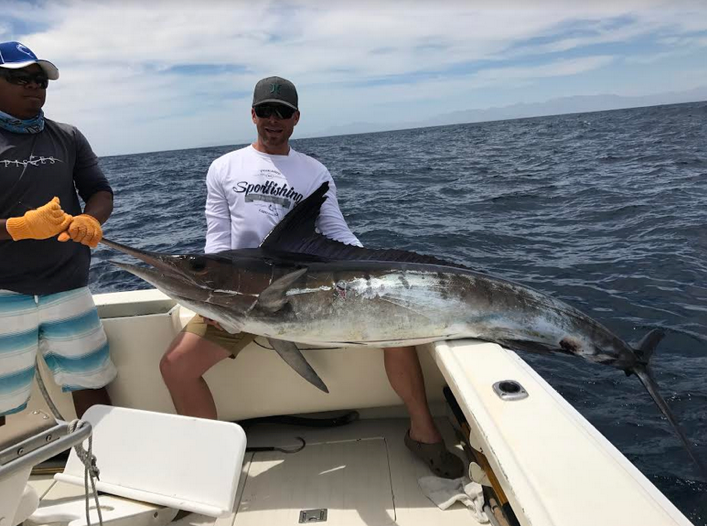 Angler Matt Glenn shows off this striped marlin estimated at around 180lbs, just before being released back into the water aboard the Pisces La Brisa.

This week we saw some days with great marlin catches while others days were better for inshore. As last week we were catching yellowfin tuna, and now this week it seems like they moved out of the area with none being landed. However, to make up for it we had a great variety of inshore fishes, we had: red snapper, skipjack, triggerfish, sierra mackerel, ladyfish, red snapper and grouper, as well as mako and hammerhead sharks (released). Most of the fishing took place either at the Cabrillo seamount or the 11:50 spot, while those targeting inshore species went up along the Pacific side. The Pisces Tracy Ann captained by Julio Castro was our top marlin boat this week, catching and releasing four striped marlin on two separate days. On the 8th they were fishing with some clients from Cleveland Ohio out between the 11:50 and Cabrillo spots; while on their second trip they fished just at Cabrillo with some anglers from Priset River, Idaho. The Pisces Ruthless captained by Roberto Padilla also had a really good day on the 8th, catching and releasing four striped marlin on cocinero live bait at the Cabrillo seamount for some anglers from Illinois. 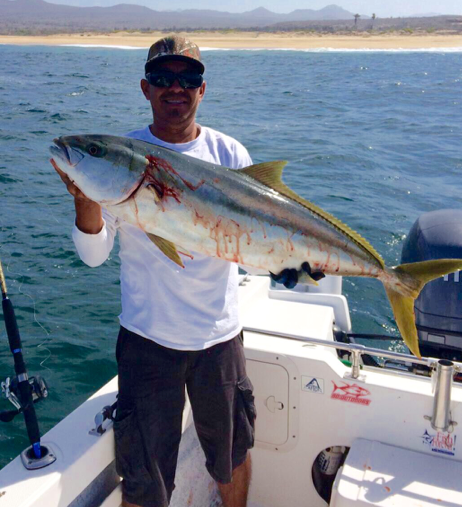 Captain Cesar Cota of the 24ft panga Pichurro with a 35lbs yellowtail landed at San Cristobal.

While fishing some 37 miles offshore from Chileno beach, captain Erick Orozco of the Pisces Hot Rod put his anglers from California on a really nice catch, a 50 pound wahoo, a very nice treat indeed for this fishermen. The inshore bite saw varied action, on the 13th the Pichurro panga put its lone angler from Colorado on a beautiful 35 pound yellowtail just off of San Cristobal. The Pisces Adriana captained by Nicolas Winkler was fishing at Los Arcos when they put their anglers from New York City on nine sierra mackerel of around six pounds and a nice 10lbs amberjack. Fishing much closer to the Pisces dock than usual, the panga Poseidon had nine ladyfish, two red snapper, two skipjack and a large hammerhead that was released, estimated at around 200lbs; these were all brought in by some anglers from North Carolina. 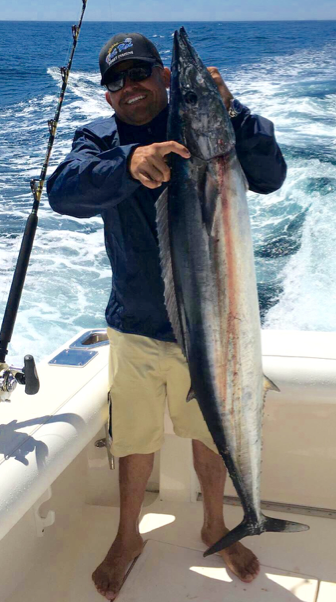 LOCATION: 11:50 Spot, Cabrillo seamount and inshore on the Pacific side.