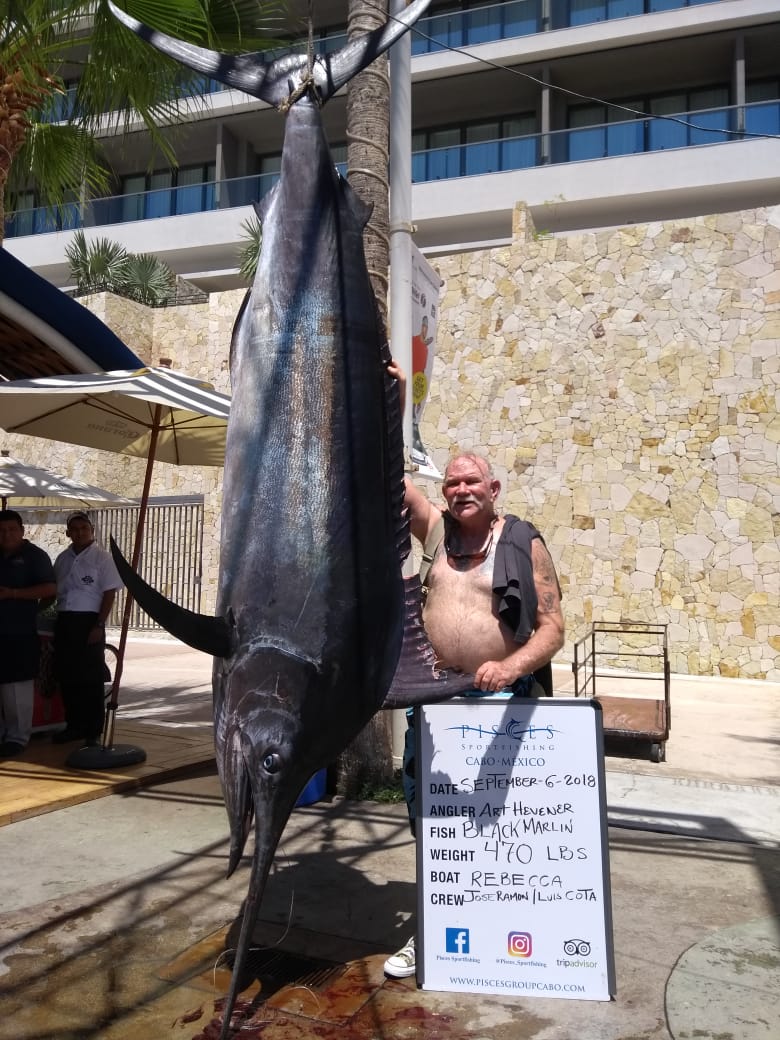 Catch rates have increased this week, with more dorado numbers showing up, but not in the big sizes like we saw last week. Small to medium size tuna has still found more consistently as well. And this week proved more than ever that Summer may be “slower” but it also has the potential to fulfill some big dreams with a large fish if you’re lucky enough. A few weeks ago I mentioned having to fish a few days to guarantee the best success, well Art Hevener, a Pisces angler for more than 20 years proved just this point. He fished three days with Captain Jose Ramon Alucano (JR) on Pisces 31′ Rebecca and landed an impressive 470 lbs Black Marlin, his dream fish.

Hevener fished on the Pisces 31′ Rebecca Sept 5-7th; angling between the first and third day two nice 200 lbs blue marlin, one out at Destiladeras and the other at Punta Gorda, both released. The next day, Capt. JR tried (and found) his luck at Punta Gorda. He set out some sardines to catch a few yellowfin. They landed two 15 -20 lbs tunas and used those for bait. The black marlin took the yellowfin and put up a 2 hour long fight. Unfortunately, the fish ended up dying, and was kept for this reason. This was Henever’s 71th billfish caught. He had been dreaming of catching the black marlin since he first started fishing, and this was the last billfish on his “bucket list”; as he has already caught every other billfish in the world except for a black. His excitement and happiness was palpable, as he said to us “This is my dream”. When asked why he chose Pisces year after year, he said “The fishing is great. I like fishing with JR and I like how things are done here. It’s good.” He has always fished on the Rebecca with the same crew. And as we celebrate this year, our 40th Anniversary, it is stories like Art’s that make us so happy to still be doing what we are doing. We are all truly a family and wouldn’t be here without our faithful anglers and our loyal crew. Tomorrow we will be having out first ever, and probably the only ever Crew Tournament, worldwide. Almost all of the boats in our fleet will be participating; crews fishing against one another, getting to do what they love the most, putting themselves to the test, and having some fun, without any clients on board. It will be awesome to see how the boys do, and see who will be crowned “the best” in the fleet (even if they are all winners in our eyes!). 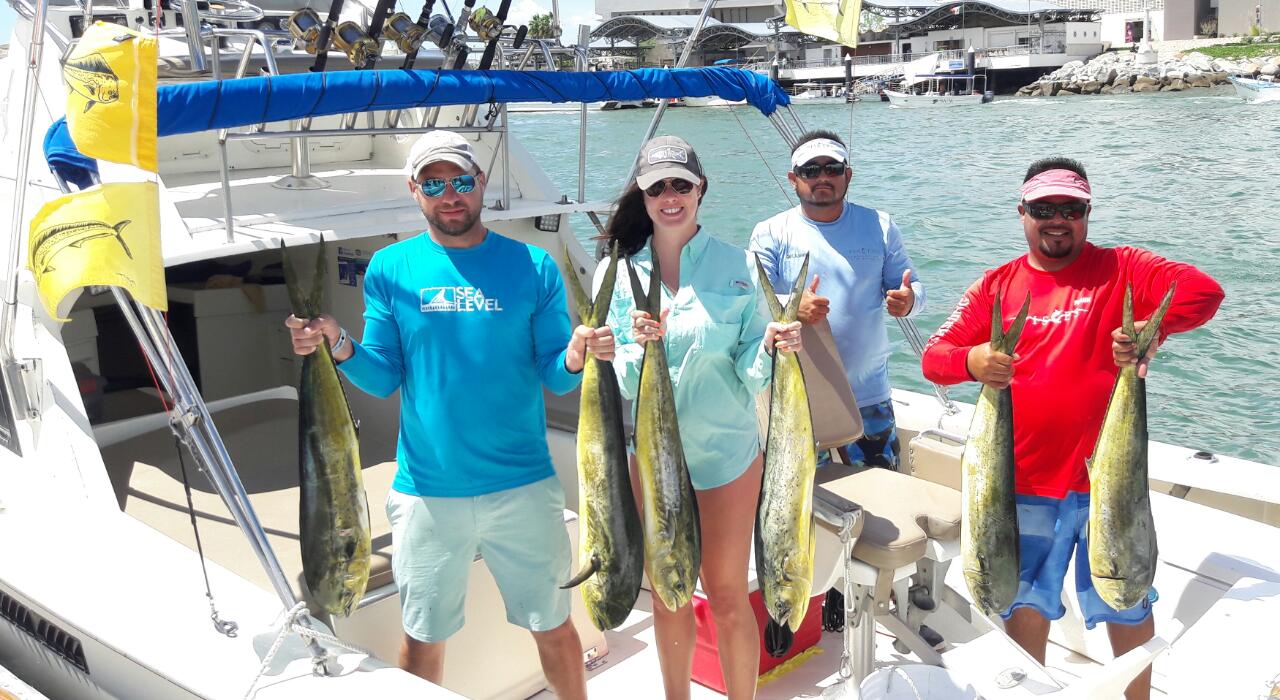 Anglers Kyle and Kaytlyn with their dorados caught aboard Ruthless

Other great billfish days were had this week, with Pisces 28′ Andrea, for example, catching and releasing 3 billfish in one day. Two striped marlin just under 100 lbs were caught and released on caballito bait outside of Gaspareno, and another blue marlin, about 200 lbs, released at Golden Gate.

The Pisces 31′ Ruthless, and Pisces 28′ Andrea where some of the best for catching dorado this week. The Sterling’s, featured above in our fish report, also fished on the Ruthless, catching 6 dorado of about 10 to 15 lbs each on red/blue/green/white lures at Pozo Cota. On Sept 8, anglers, Kyle and Kaytlyn Kuecker, caught 8 dorado (1 released) of about 15 lbs each out at Pozo Cota on feathers.  The Andrea caught 6 dorado this same day, all of about 15 lbs as well, on green/black and feather lures out at Las Margaritas. Anglers were the Vu family from LA. Beginning the week the Andrea had slightly larger dorado catches, but not as numerous; they landed two 20 – 25 lbs dorado on green/black lures at Gaspareno. 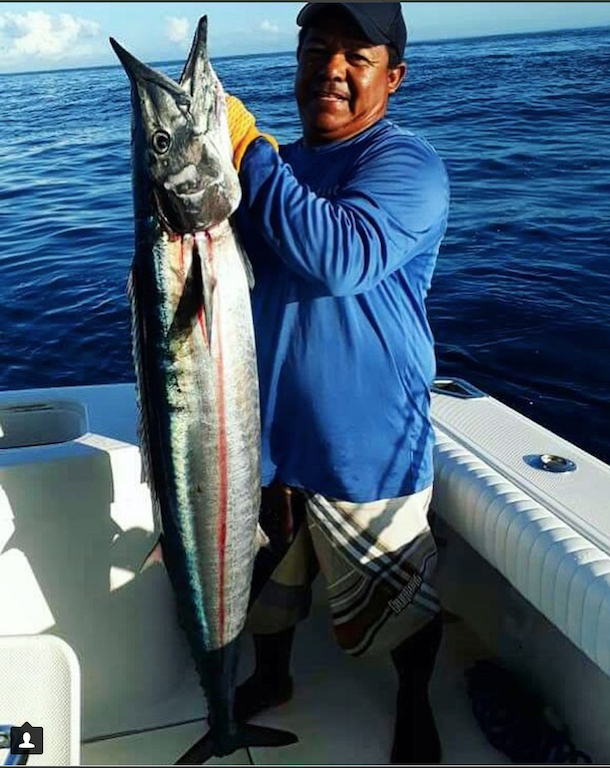 Pisces 32′ Bill Collector was the only boat to land a wahoo this week, and a nice one at that. The wahoo weighed approximately 50 lbs  and hit on a blue lure at Pozo Cota. They also landed a very small dorado, which they released.  Later in the week the Bill Collector caught and released 1 striped marlin of about 120 lbs and caught 6 yellowfin tuna on feathers at the 11.50 Spot.