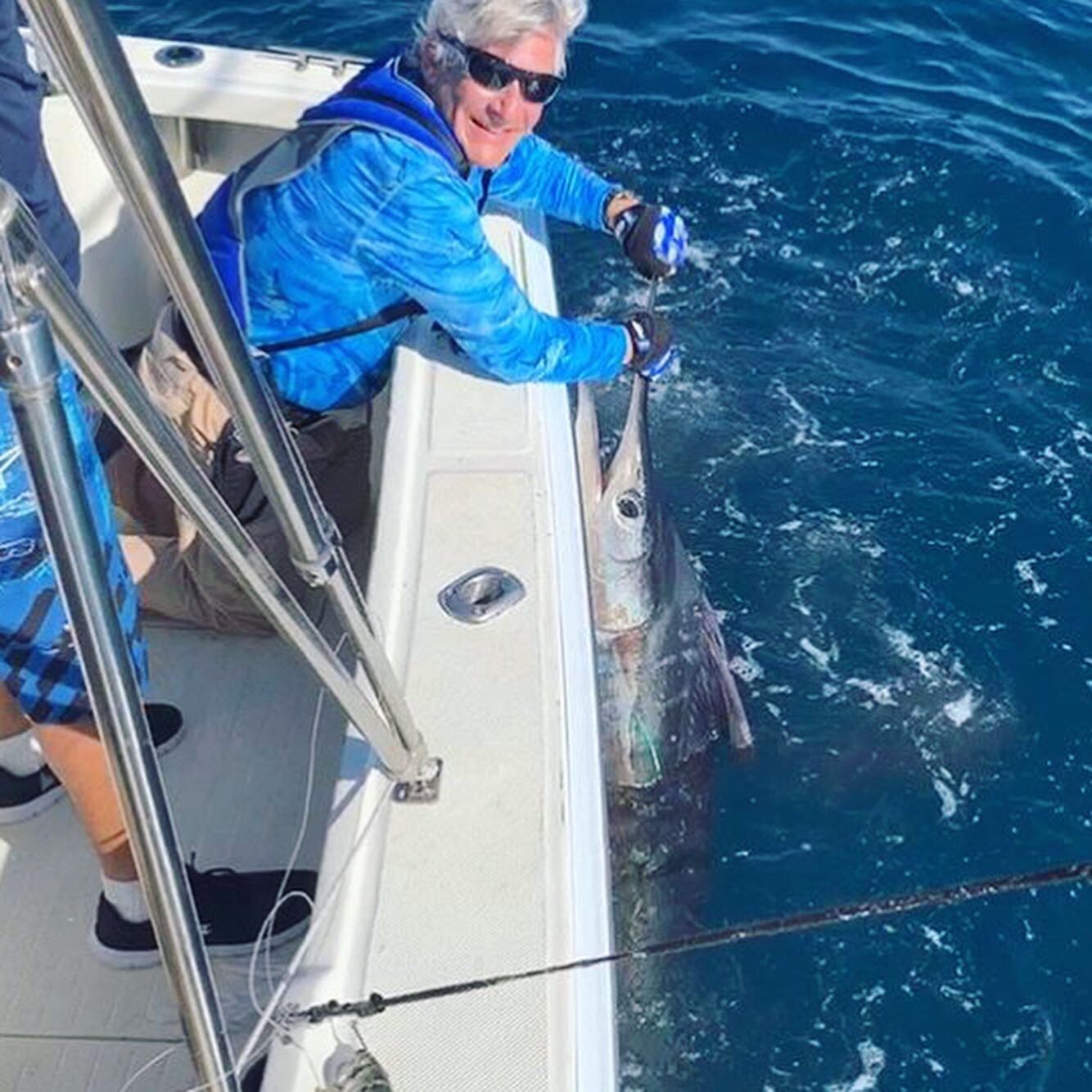 This week the weather has remained pretty stable, with only one or two days of strong winds, but this didn’t seem to affect fishing much. The inshore action picked up quite a bit, with roosterfish, sierra and jack crevalle being the main targets. Top boats caught and released up to 13 roosterfish in one day. Marlin catch and release percentages also remained constant, although many boats did spot many marlin but struggled to get them to bite. With that said,  the top boat, Pisces 31′ Tracy Ann, released 5 stripeys. And, seems like we’ve been closing out the week with great wahoo catches. Again, a nice wahoo caught on Pisces 31′ La Brisa, estimated at 60 lbs.

We’ll start off the report this week with the wahoo catch by anglers Darrin Heisey, James Thiele and John Frost from Carlsbad. They were trolling a blue and pink lure close to Vinorama area on the Sea of Cortez when the fish struck. Captain Rey winkler (who has over 35 years fishing experience with us) estimated the fish at about 60 lbs. 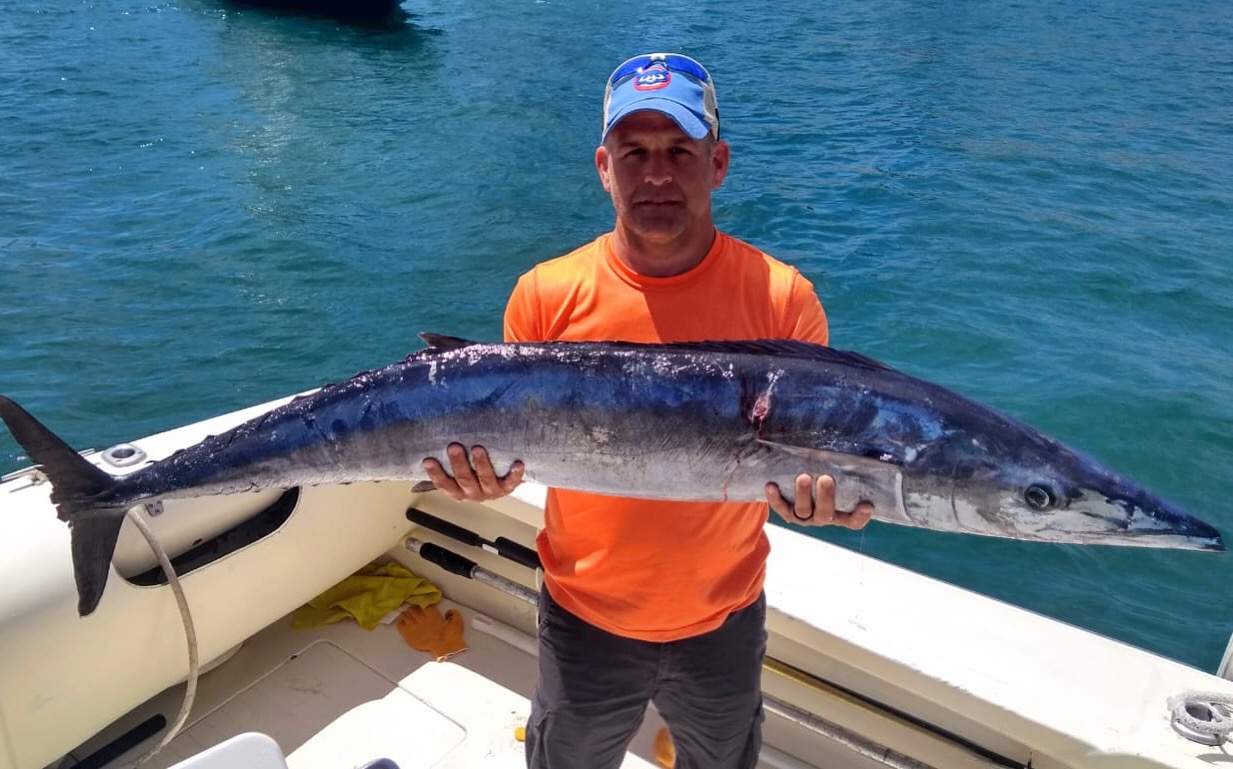 Top marlin boat this week, Pisces 31′ Tracy Ann, and anglers the Azoulay’s and friends from Vegas, Nevada, caught, tagged, and released 5 striped marlin. The marlin varied in weight from 80 to 100 lbs each, and all hit on live caballito bait. Double hook up at one point as well. Three of the marlin hit at the Cabrillo Mount and the other two at the 11:50 Spot.

Father-daughter anglers Mark and Leyah Farber from Miami, FL also caught 5 striped marlin with 31′ Tracy Ann over the course of their 3 days fishing aboard. Most of the fish were caught at the 11:50 Spot and only one at Punta Gorda area. All were caught on live caballito bait, pitched at the marlin they spotted. The largest of the marlin caught was about 140 lbs, with others averaging 100 lbs.  They also caught one 20 lbs yellowfin tuna on a cedar plug lure and a jack crevalle, released, on caballito out of Destiladeras. Another jack crevalle caught and released of about 20 lbs hit on slow trolled caballito bait at Punta Gorda as well. 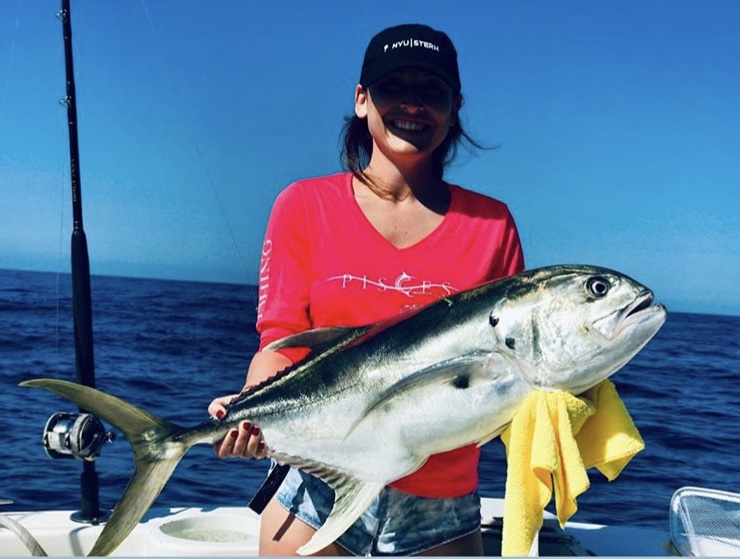 Pisces 28′ Andrea also had a great week and released 2 striped marlin of about 100 lbs each, which hit on live caballito and trolled bait at the 11:50 spot. The next day they released 1 striped marlin on live caballito outside of Destiladeras and landed 7 yellowfin on cedar plugs and feathers, all of which were around 15 to 20 lbs for anglers David Beardmore and Morgan Wylie from CO.

Lots of tuna on Pisces 38′ C Rod too – 20 yellowfin total which hit on a variety of lures, cedar plugs, feathers, hoochis, and green lures, using the kite too. All fish hit around the La Herradura area art about 25-30 miles out. Anglers were Zach Collins and friends from Nevada. Pisces 31′ Rebecca also caught some tuna, landing 10 total, which weighed between 15 and 25 lbs each, hitting on cedar plugs, and green/yellow lures at Cabrillo. Anglers Melvin and Mona Scherer also released 1 small striped marlin which hit on slow trolled caballito. 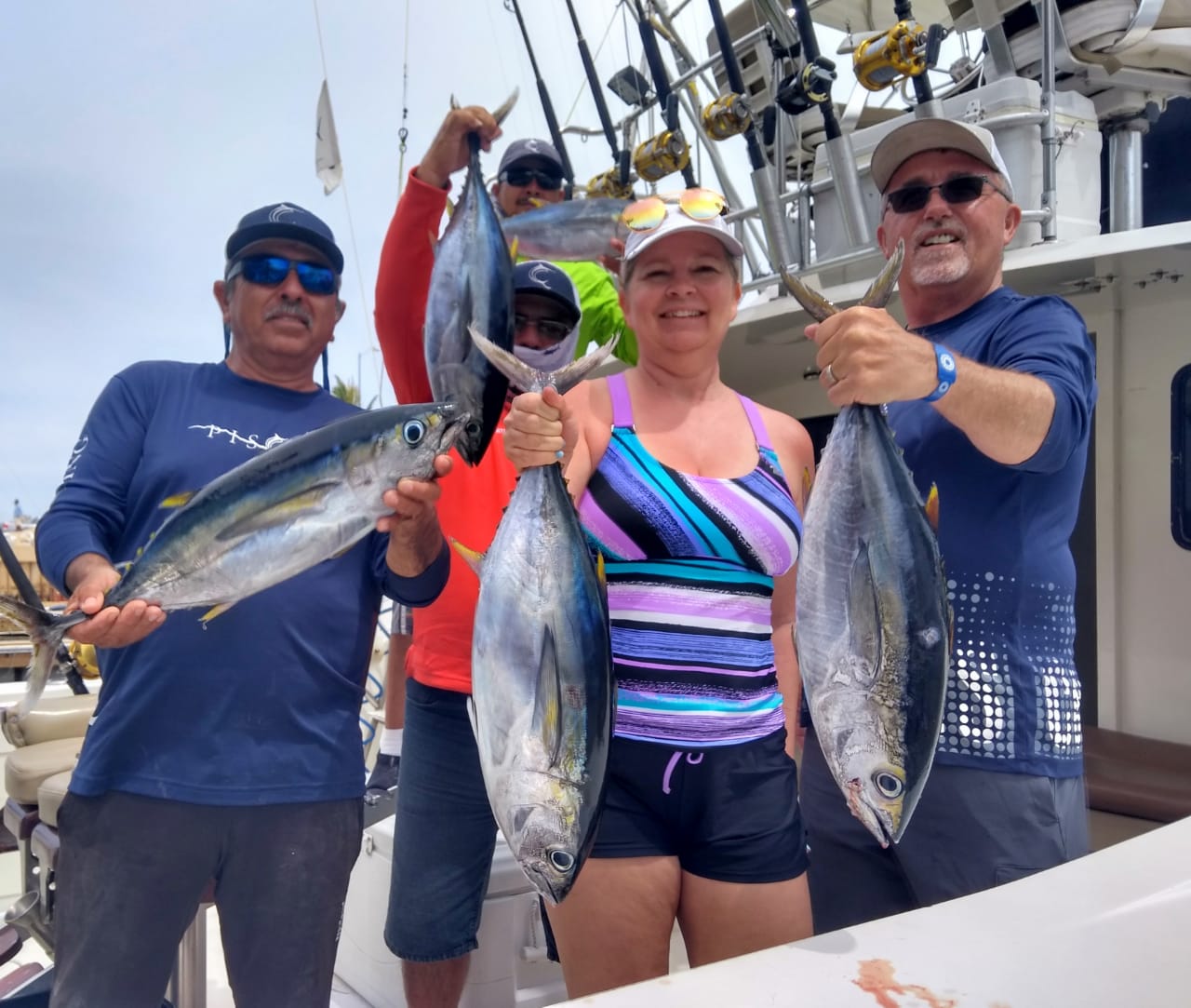 Highlights for the small game action were very hard to choose this week, as we had so many great catches, but here is a few.

Top roosterfish boat this week, was hands down, Pisces 23′ Panga Samantha with 16 roosterfish released. Their best day was this Friday, with 13 roosterfish and 2 Sierra mackerel caught. Anglers Jason Bellati, Jeff Chastain and Ricardo Gutierrez from San Diego, CA, caught the roosters on live bait out of Pedregalito area, with the largest of them weighing about 20 lbs, and all released. The sierra hit on green/white hoochis and weighed between 5 and 7 lbs. Not bad for a half day of fishing! 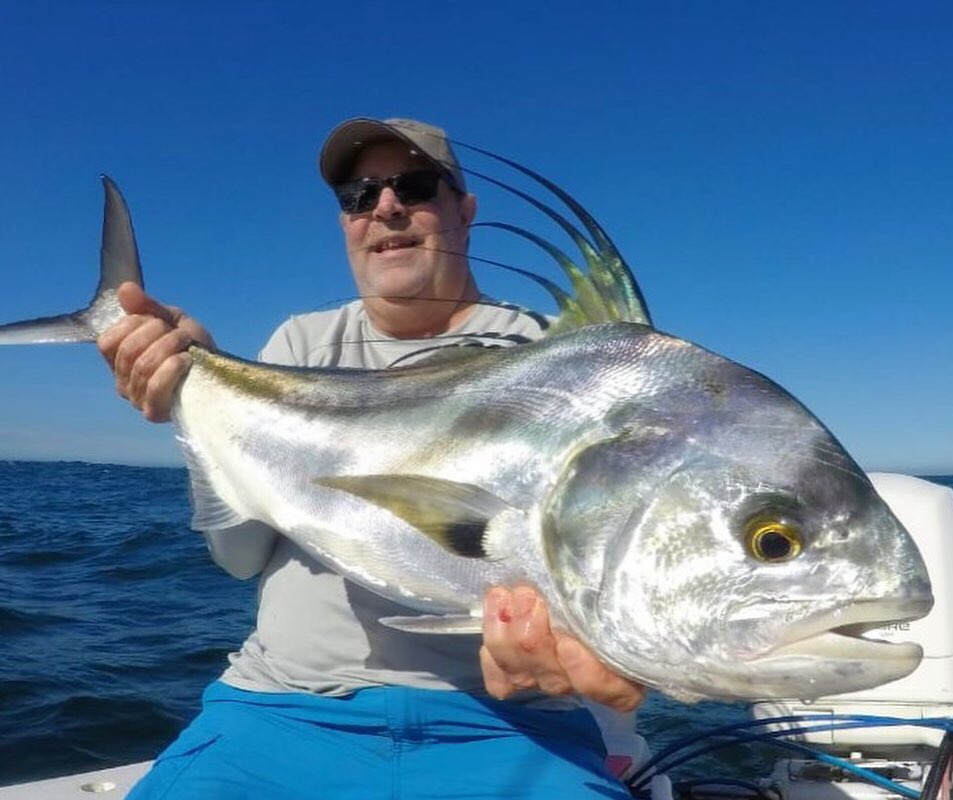 May 6th, Pisces 23′ Samantha did well to release 3 roosterfish, which weighed up to 10 lbs, hitting on live bait out in front of Pedregal. Anglers Sid and Stacey Laub from TX, also released 5 jack crevalle, most of which hit on small green lures and live caballito bait, out from the Old Lighthouse. To finish off the day they caught 4 Sierra mackerel on green hoochis.

Pisces 25′ Panga Gringo Loco also did very well with roosterfish, releasing 7 in total, ranging in weight from 3 to 10 lbs each, out of Pedregalito, which hi ton live caballito. 1 sierra mackerel hit on an orange hoochi there too and 1 jack crevalle hit the slow trolled caballito, released. 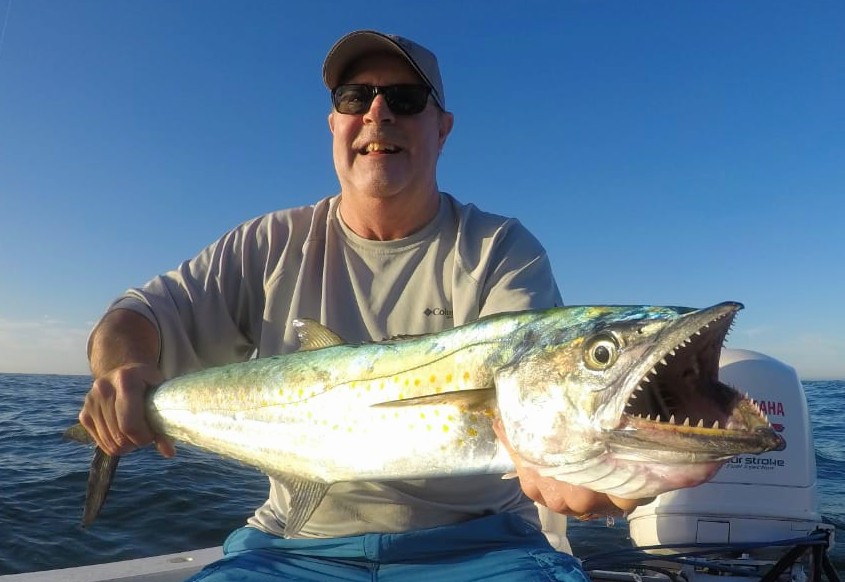 Another 7 roosterfish released aboard our Super Panga, Pisces 27′ Tres Amigos. They hit live caballito bait out of Pedregal and 1 jack crevalle released as well, of about 15lbs on the slow troll bait, for anglers Melvin and Mona Scherer who also fished on the Rebecca this week.

LOCATION: 11:50 Spot, Cabrillo mount, Punta Gorda through to Destiladeras. Inshore fishing mostly on the Pacific: Pedregal up to La Bomba.

WEATHER CONDITIONS: Mostly sunny, intermittent winds on two days of up to 15 knots. Other days much calmer, with seas of 1-2 ft.

AVERAGE WATER TEMP: Temperatures varied from the Pacific to the East Cape side, with Pacific about 5-7 degrees cooler.