BILLFISH:  The billfish have been relatively slow for this time of the year.  We’ve been scratching our heads a little bit about this, so we took a look back to compare to the last few years fishing through this season.  We’ve found some interesting factors that may be affecting our marlin catches.  These are of course, that the water is still pretty warm for this time of year, reaching temperatures as high as 78 F in some areas.  It also seems that there is not as much mackerel and ballyhoo in our waters as other years, and we’ve found this to be the bait of choice throughout this season for marlin.  There are big schools of bait that we’ve come across and have seen marlin, but many times they are just not hungry enough.  But, how about those two BIG blues caught just a week ago weighing around 700 lbs each?  We must say, the marlin have a mind of their own, and are obviously around just a little bit harder to find, for now.  Instances like these really show how little we know about the species and why research and conservation are increasingly important.

With all that said, we did manage to catch a few striped marlin this week.  Twenty-five foot panga Diablo Loco showed us that size doesn’t necessarily matter when it comes to fishing.  David and Pamela from Colorado had a spectacular day, catching one striped marlin, two dorados, one redsnapper, one grouper and one bonita all on caballito bait between Solmar and Pedregal.

Bill Collector had an even more spectacular day, if that’s possible, with anglers Kelly and Jeff from Minnesota catching and releasing one decently sized 180 lb. striped marlin on live caballito out of Las Margaritas.  They also caught six dorados, ten sierras and one wahoo on green and blue/white lures.

OTHER SPECIES:  What haven’t been hard to find this week have been dorado.  In comparison with the last three years, we’ve seen an increase of up to 45% in catches for dorado during this same season.  On the other hand, as with the marlin, the tuna catches have been lower, where in 2014 we had a 40% catch success rate for this same week in January, and a 79% catch success rate in 2013, this week we only saw 8% of boats catch tuna.  The lower tuna catches may also be due to the fact that there is so much dorado and wahoo that anglers are going out looking for them, since they are relatively close to shore, where as the tuna are usually found far out.  Unless of course you get lucky and find a pod of dolphins hanging out with them, as was the case for the thirty-five foot Valerie and anglers from Florida, who caught ten yellowfin tuna ranging from 10-20 lbs out of the Pozo Cota.  They also caught one dorado around 10 lbs in the same area. 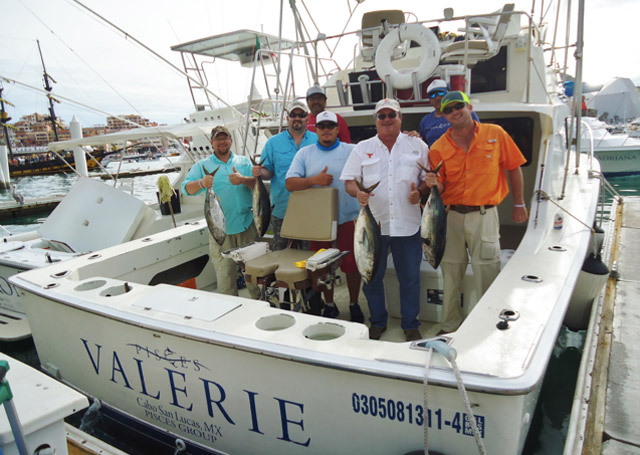 In the case of the Andrea, they went out looking for tuna and found it 13 miles out of Gaspareno, catching twelve total on hoochis. They also caught six dorados on caballito bait.

The Tracy Ann had a dorado-filled day on Friday, catching 25 dorados between 15 and 25 lbs on both bait and lures (blue/white and black/red) out of Cerritos.  Catch limits were respected with ten successfully released.

The Rebecca also landed quite a few dorados, twenty total, on caballito bait and blue/white and green lures out of Golden Gate. They also caught a nice wahoo, weighing 22 lbs. 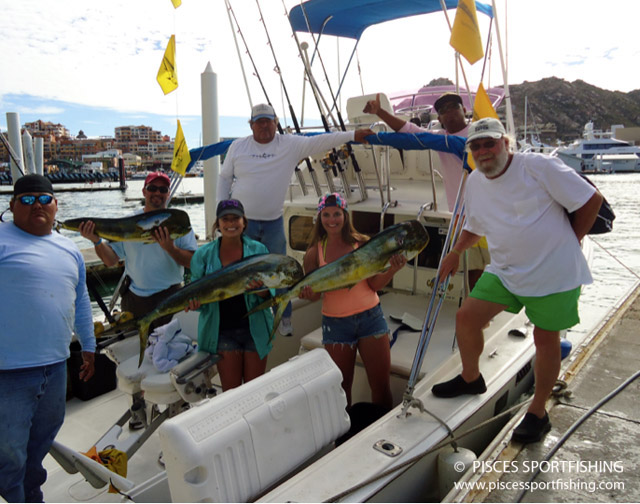 Anglers Bob Stanley, Ronnie Heller, Caylee Heller and Kelly Massey from California, showing off their dorado catch on the Rebecca. 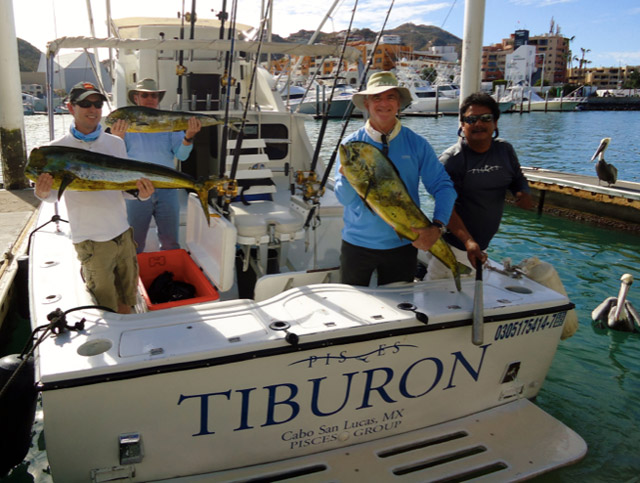 Anglers Michael and David Lorick from South Carolina and Steve Hansel from  New Jersey with their  catch of the day on the Tiburon.

The pangas proved themselves once again in catching the smaller game fish, with twenty-two foot panga Gloria catching fifteen sierras, one redsnapper, one pompano, and one mojarra.

Based on the catches of Pisces Sportfishing by Rebecca Ehrenberg.