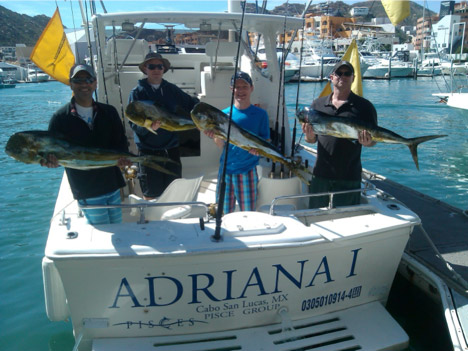 BILLFISH: Marlin fishing is on the slow side right now, in that we have not seen the huge migrations from the Pacific that we often see at this time of year.  Factors to be considered are the warmer than usual water temperature and that a lot of the marlin are feeding on the bottom, so it is hard to pinpoint where they are.  There were a couple of days when the boats were successful in finding them, but getting them to bite was another question.  There were times when they were seen free jumping, as if performing an aquatic show, but totally ignoring the bait offered.  Pisces C Rod was one of the most fortunate boats this week though, as on January 11th they managed to release two good size striped marlin, up to 150 lbs. and a late season sailfish, both on live caballito in front of the Old Lighthouse for Dan & Grayson fishing with Jonathan & Michael from Texas.  The day before Tracy Ann did well to release two marlin, a bit smaller at 100-120 lbs. at the Cerros de Arena for Don Gordon & family from Oklahoma.  One of the few boats to achieve more than a single billfish catch, they went on to get two more that they released around the 130 lb. mark, plus six dorado for the Klein family from North Dakota  – they fished Migrino and off of Golden Gate.  We looked back to check how things were in years past for this same period and found that 2011 & 2012 were the same, slim pickings for marlin, but that 2013 & 2014 were about fifty percent better.  Pisces Sportfishing anglers caught a total of 8 striped marlin and 1 sailfish this week; all released. 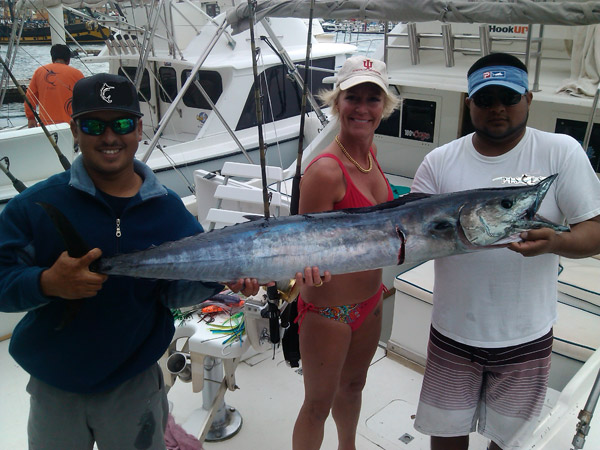 OTHER SPECIES: We could have called this the dorado report, but we are not complaining with eighty five percent of our boats hooking up to between one and twenty fish up to 30 lbs., giving us a total of 241 fish caught, with many released.  January 11th Ruthless scored sixteen dorado between Golden Gate & Migrino for Kathy & Glenn from Toronto and 28 ft. Adriana had twenty plus two yellow fin tuna & a jack crevalle for another group of Canadians, from Alberta headed up by Bryce.  January 16th gave us some of our best catches of the week: Tracy Ann had Douglas, John, Martin & Rob  from Palos Park, Illinois on board – which is good they had some many anglers, because they caught eighteen dorado, twenty sierras and four tuna – forty two fish total, bet they were tired (many of their fish released).  This same day Valerie headed to Golden Gate and landed ten yellow fin tuna up to 18 lbs., plus ten dorado for Jeffrey and friends from El Capo, Texas.  Not to be left out, Yahoo was the envy of the fleet for catching three wahoo up to 40 lbs., plus six dorado and a skipjack for Dwayne and friends from Hillsboro, North Dakota.  The only other catches were inshore for yellowtail, amberjack and a few skipjacks. Oh, and an accidental hook up on a green turtle that was released unharmed.