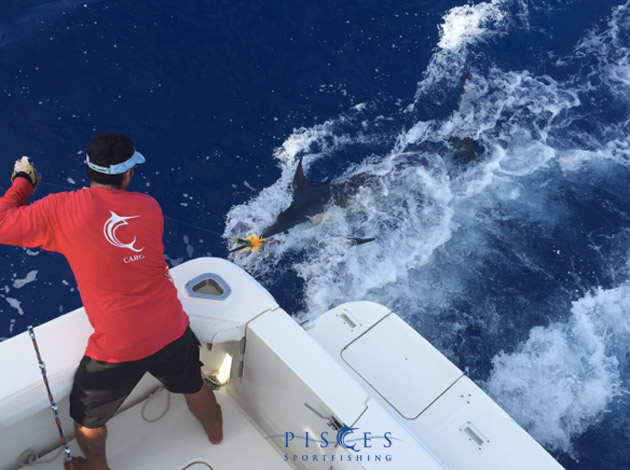 BILLFISH: Fishing is really good in Cabo right now, but not for everybody with just a little over seventy percent of charters catching – which is great if you are on the positive side of the equation but not so good if you were in the close to thirty percent that did not catch this week.  The thing is, we are really spoiled in Cabo, anglers expect to catch fish every time out and at this time of year that is simply not the case.  The water is great, blue, mostly calm and high water temperatures, up in the high 80’s but there is a lot of bait in the water, giving the fish a lot of choice and making them less hungry.   Factoring all this in we can still say without a doubt that this is the best blue marlin and sailfish season we have seen in years – you just have to be patient and perhaps book more than one day to be sure of catching fish.  Blue marlin are trickier to catch and many times were seen or even briefly  hooked before getting off;  this scenario was repeated with sailfish, so catch rates could have been higher.   We saw some great catches and it was nice to see striped marlin rebounding – Tracy Ann caught two up to 160 lbs. on August 7th for Luv  & Brittany Mirani from Atlanta, Georgia at Los Arcos.  On August 10th Bill Collector had a great day for the Roester family from San Francisco; they were fishing at the 11.50 spot and were fortunate to release a 300 lb. blue marlin and a large sailfish that was close to 120 lbs.  South Carolina anglers Robert & Fran Powell had a busy day aboard Andrea releasing two big sailfish and a 140 lb. striped marlin, that took petrolero lures and one live caballito.  One of the top catches of the week was by the Nave family from Texas; they were fishing the area between the 95 and 11.50 spots and managed to catch and release four sailfish and a blue marlin aboard Cabolero.  Brian Anderson & Clayton Bartlett, from Houston, were the only anglers to catch two blue marlin in a day, with the fish between 220 and 300 lbs. both on lures aboard Tiburon.  This same day another 31 ft. Bertram Rebecca released a 300 lb. blue marlin and a 110 lb. sailfish for Brett & Dagney Olson from Scottsdale, Arizona. Pisces anglers caught at total of 110 billfish this week consisting of 23 blue marlin, 37 striped marlin and 50 sailfish. 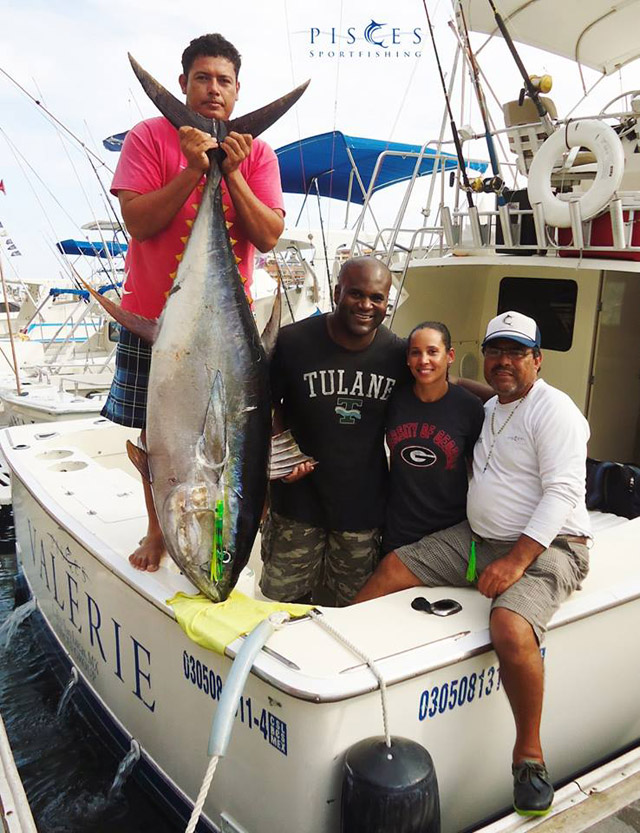 OTHER SPECIES:  Billfish was what most anglers went after this week, as the odds for catching were good, however we did have some nice tuna catches – nice size fish but not many quantity wise.  Brian Williams caught a nice 163 lb. tuna on a green and yellow lure aboard Valerie.  The McWhorter’s from Georgia had a nice 121 lb. tuna on Bill Collector and were fortunate to release a blue marlin the same day outside the 11.50 spot.  Just eight percent of or boats found tuna, giving us a total of 24 fish caught.  Dorado catches were on the slow side with just nine smaller ones caught.  The panga Poseiden  released a large pilot shark which was estimated at 170 lbs.  Other fish caught were a couple of wahoo, we even heard of one close to 100 lbs., though ours were in the 35 to 50 lb. class.  Inshore skipjacks, bonitas and a few yellow tail were caught.