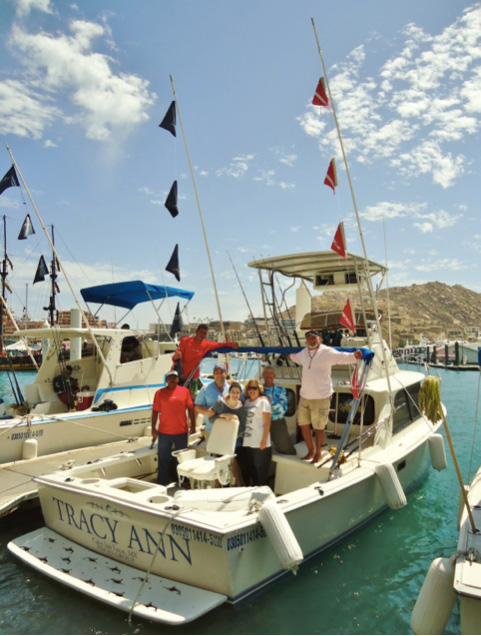 The Farbers from Miami, released five marlin on Tracy Ann, our top boat in this report.

BILLFISH:  This report covers two weeks as we were unable to get one out last week, as we were having too much fun enjoying the Sea of Cortez.  Inconsistency has been the watch word for the last two months and the first part of this reports seemed to follow the same vein but as we entered the latter half of this report, things turned around and we started to see multiple marlin catches on a regular basis.  It may be to do with the weather, as we started to have some colder nights.  Marlin were seen with more frequency, though they were not always hungry.   Tracy Ann our 31 ft. Bertram was easily our top boat this report.  This was the crew that kicked the door open on April 8th, when they released five striped marlin for Bob Schneider from Youngstown, Ohio fishing at the 95 spot.    They followed up a few days later with five marlin and four skipjacks at the Cerros de Arena for Brad & Robert Dickinson from Washington and then went on to release four marlin up to 160 lbs. plus a dorado for Daniel Alonzi & friends from Lone Tree, Colorado.  As if this was not enough they finished the week with another five marlin at the 11.50 spot for Mark, Cary & Saul Farber from Miami.  This boat caught and released twenty nine striped marlin in this report.  La Brisa headed to the 11.50 spot on April 17th with Kevin & Tom from Wauwatosa, WI, aboard and managed to release four marlin up to 130 lbs., which all took live caballito.  We saw a definite improvement the second half of this report when boats regularly caught between one and three marlin giving us a total catch of 118 stripers of which all but one were released. 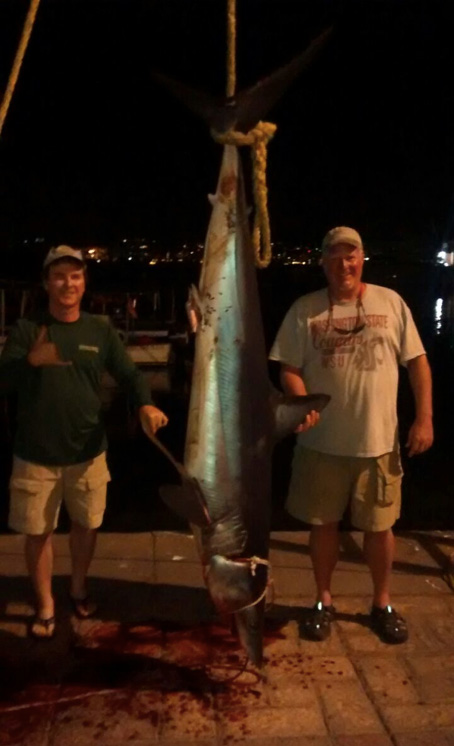 OTHER SPECIES:  The most notable catch was a mako shark we heard of that came in around 9.00 pm on April 18th – this was not aboard a Pisces boat, but we were able to obtain photos, though not full details as yet.  We know it was caught aboard a boat called Griscelda and seeing as the scale was closed the weight was estimated at 250-350 lbs. – more details to follow shortly.  Nevertheless this is the largest Mako we have seen in years, with the average weight usually around 40 to 80 lbs.  Dorado catches had a bit of a comeback with twelve percent of boats catching one or two fish over a widespread area in the 15 to 30 lb. class.  Smaller game catches, mostly inshore, were pretty good accounting for forty nine percent of our catches.  There were lots of skipjack, sierra on some days, roosterfish, needlefish, amberjack, jack crevalle, triggerfish and a couple of smallish wahoo.

Based on the catches of Pisces Sportfishing, Cabo San Lucas, by Tracy Ehrenberg