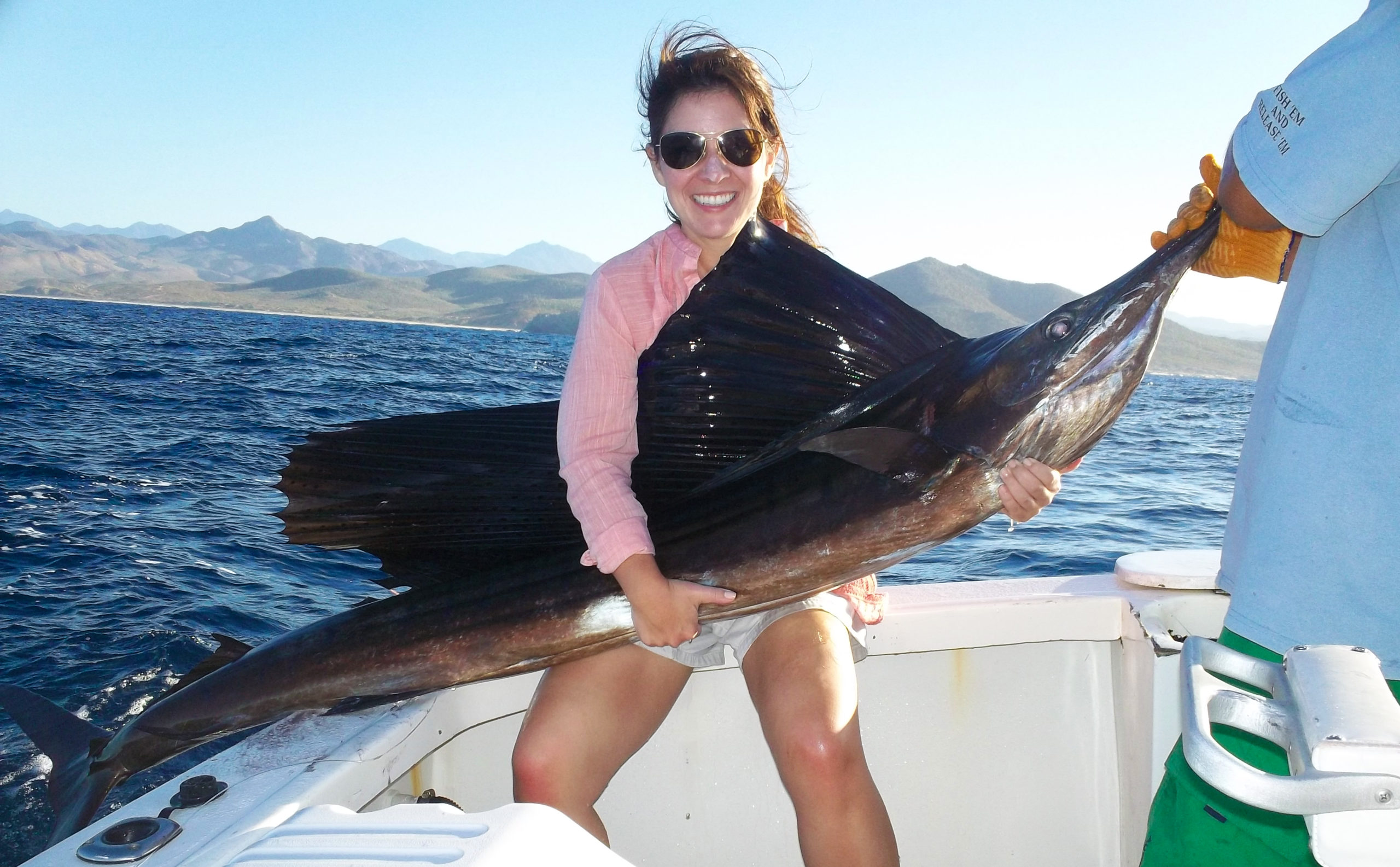 BILLFISH: Although the week was cut short because of hurricane Norbert’s arrival, we still got off to a good start with all except for one boat (the anglers got seasick) catching fish on Saturday. The catch of the day was dorado, with all boats catching anywhere from 3 to 15 each. Dean Malhiot and friends from Calgary, Canada who fished on the Rebecca lead the way with 18! All were caught outside of Golden Gate. All this dorado made Cabolero the standout boat, which hooked and released the only marlin of the day. Geoffrey Simpson from Houston, Texas brought in the 180 lbs. striper in on live bait, out in front of Las Margaritas. Also caught on Cabolero that same day were 12 dorados, ranging from 10 to 20 lbs. The billfish catches did pick up a bit on the next day and throughout the week. Ben and Chelsea Allen from Fort Worth, Texas caught one striped marlin and one sailfish, both released, as well as two dorados and six skipjacks aboard the Flora-T.
Cabolero found itself once again to be positioned in the right area on Sunday, with anglers Hank Smith from Texas and Matt Herbert from California catching one sailfish around 70 lbs., one striped marlin around 140 lbs. and two dorados, all in the area of Golden Gate and Gaspareno.
Monday was a rough day for anglers as one boat had no luck due to seasickness and three others found themselves chasing after marlin and sailfish, which just wouldn’t bite. The Ruthless did land a blue marlin, and a pretty decent sized one at that, weighing approximately 250 lbs., which was released. Anglers Tanner Shultz and Clayton Ruszkowski from Alberta, Canada not only caught this blue, but also a striped marlin that they released, weighing approximately 130 lbs. and one skipjack.

Tuesday was sailfish day! Zachary Eastman from Atlanta, Georgia who fished on the Adriana caught two sailfish weighing around 100 lbs. each out at Cabrillo on caballito bait. The Tiburon and La Brisa also caught two sailfish around the same size, with La Brisa anglers Richard Pryor from Reno, NV and Phylis Horse from Susanville, CA reeling them in and releasing them at Punta Gorda instead. The Rebecca surprised us this day with Mike Pitts and Chris Reneger from Bryan, Texas, catching themselves a blue marlin around 250 lbs. and a striped marlin of about 120 lbs. which was released. Not only did they catch this, but also 14 yellowfin tunas from 10 to 25 lbs. caught on lures outside of the 200 spot. Marlin was caught on caballito bait.
On Wednesday, hurricane Norbert began to come closer and strengthen, making seas a little rougher, but fishing was unaffected by it this day. Daniel Ryan from New York, NY caught three striped marlin this day; making it the most marlin caught by any one boat this week. The marlin were caught out in front of La Herradura on live bait and varied in size from 100 to 120 lbs. approximately and were all released. Ryan and friends also caught one sailfish and one yellowfin tuna around 25 lbs. 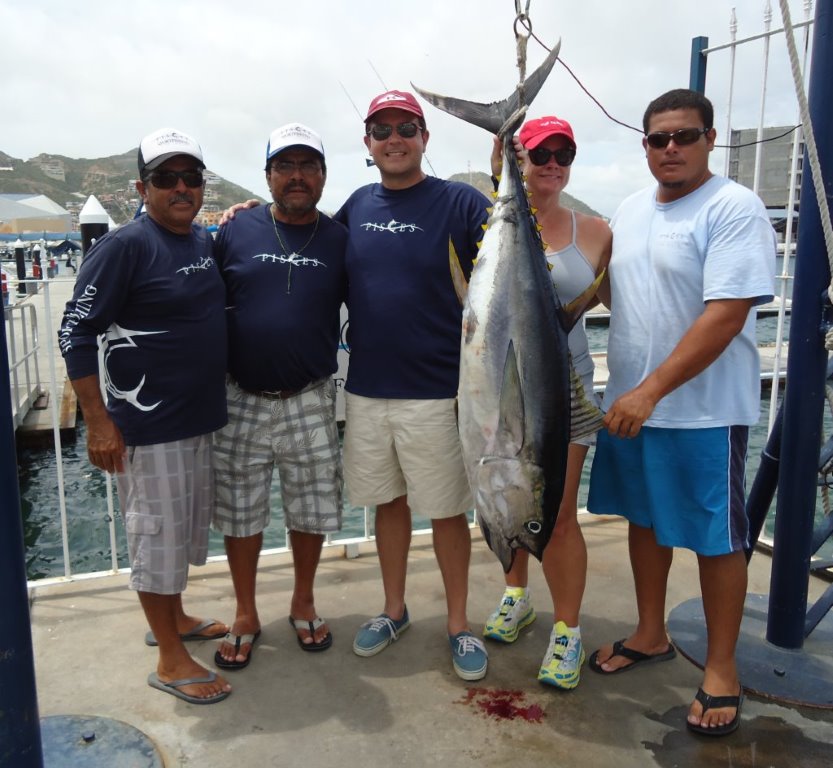 OTHER SPECIES: This week started off strong with all boats catching dorado on Saturday, bringing in a total of 116 dorado on only 14 boats, with all catch limits respected. A total of 208 dorado were caught this week all ranging around 10-25 lbs. and a few that were around 35-40 lbs. and were all found in different spots. Although we saw less of it than of the dorado, the tuna caught this week came in at around the same size, 10-25 lbs., with a few big catches towards the end of our week on Wednesday.

The top boat for dorado, by only a slim margin this week is the Valerie, with Austrian angler Ispas Mihai and friends catching 20 dorados ranging from 10-30 lbs. All dorados were caught on caballito bait in front of Pescadero. The Andrea and local anglers Roberto Violante from La Paz, Francisco Coth, Cristian Mendia and Ricardo Amador from Cabo, also found luck out at Pescadero, catching 16 dorados on caballito bait as well. This same day the Ruthless caught 17 dorados all out at Gaspareno on bait and lures (green and striped).

The Rebecca’s anglers Tim Johnston and Katy Williams from Worden, Montana toped the weight chart for the week with their 112 lb. tuna. In addition to this big guy, they also caught three more around 25 lbs. Tuna were caught 25 miles out from the 200 spot.
Albert and Kathleen Thomasson also caught a big tuna on Wednesday, weighing it in at 82 lbs. They also managed to catch two sailfish around 100 lbs. which they released. All three fish were caught out at the 11:50 spot on petrolero lures and caballito bait, respectively.

Other fish caught this week were mostly skipjacks and roosterfish, and only one wahoo around 40 lbs. caught aboard the Andrea by Jason Manning from San Francisco, CA.

LOCATION: Pacific – Cabrillo, Golden, Gaspareno, Pescadero, 200 and 11:50 spot.
WEATHER CONDITIONS: Leading up to the hurricane Norbert’s arrival weather was pretty clear with some clouds and calm waters. Port was closed due to the hurricane on Thursday thru Friday with waves as big as 20 feet at times. Now the weather has cleared up with sun shinning bright once again and waters calming.
AVERAGE WATER TEMP: 85 F
BEST LURES: Caballito, petrolero, green, purple and white/blue lures