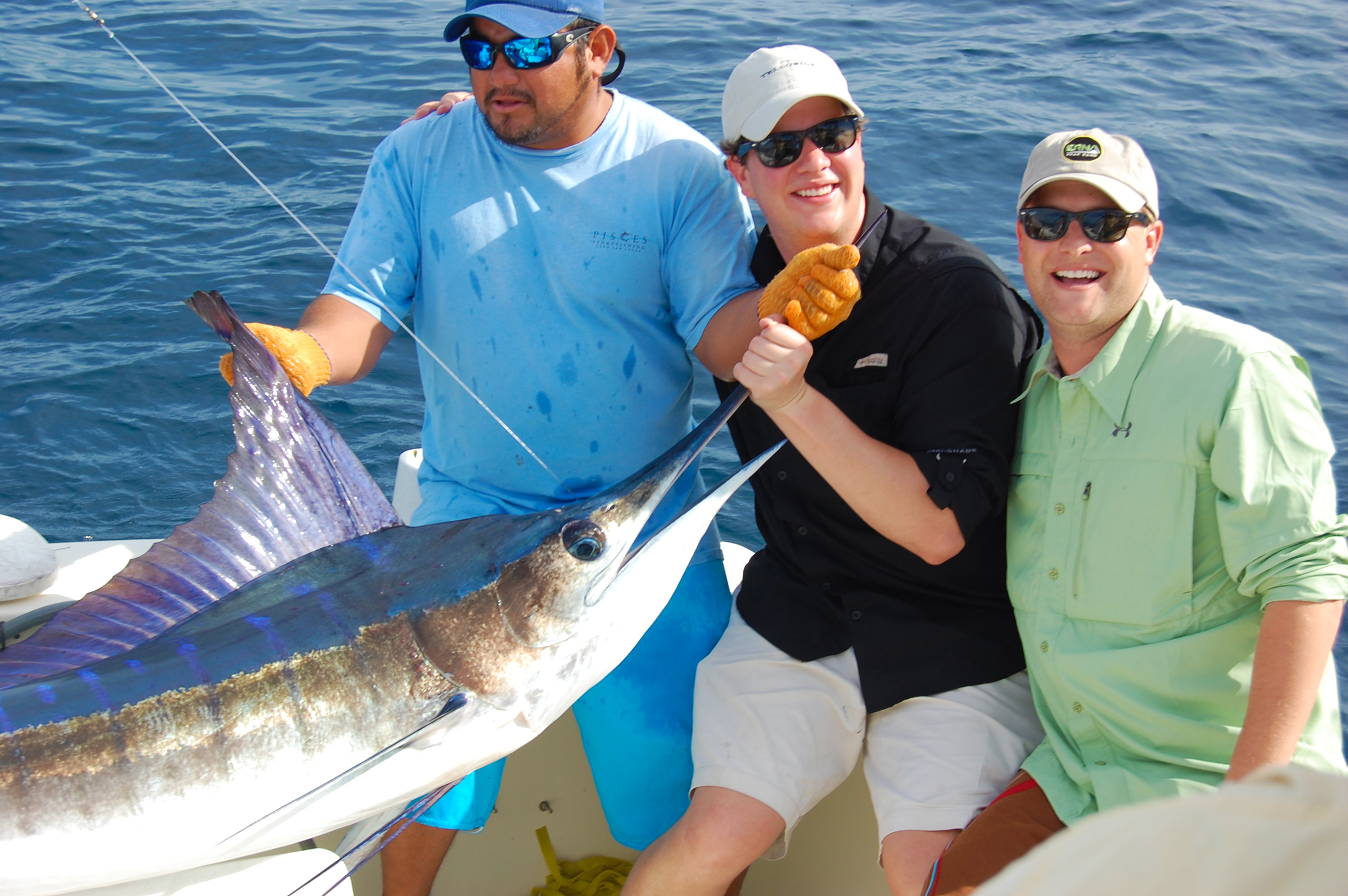 BILLFISH: The week started out a little shaky with boats not quite sure where to go as the marlin were spread out and hard to locate, so they headed up towards San Jose where the odd marlin was found as well as a bit of small game inshore.  Pisces Rebecca was one of the fortunate boats to actually find fish off of La Playita on April 27th. They caught and released four striped marlin up to 120 lbs. and boated a dorado for John Majewski, Al Ainsworth & Jay Long from Waco, Texas.  This crew knew there were on to something and headed back to this spot a couple of days later, where this time they managed to release five marlin, up to 160 lbs. for Thomas Migas from Idaho. Things changed mid-week though, when the crews discovered that the marlin had returned to one of their old haunts, the 11.50 spot and to a lesser degree the 95 spot. This day saw Robert & Christina Marshall from Temple, Texas achieve one of the best catches of the week aboard Pisces Listo, with five marlin and a 70 lb. sailfish released. This same day Rebecca, La Brisa & C Rod all released four marlin apiece making for very satisfied clients all round. It as was a shame that there were less people out fishing this week, there seemed to be a lot of people in town but many opted to stay on the beach. May 1st, a national holiday in Mexico, saw La Brisa hook Chris & Janice Smith from Sahuarita, Arizona up to four marlin, which they released.  C Rod out the following day released another four marlin, fairly big in size with one fish estimated at over 160 lbs. for Brian Crawford and party from Gulfport Mississippi.  Seventy three percent of our boats caught marlin this week giving us a total of 85 striped marlin and one 1 sailfish.
OTHER SPECIES: Boat focused on billfish more than anything else this week, nevertheless there was some dorado caught, only fair with just fourteen percent of boats hooking usually a single fish, no more than 25 lbs.  La Brisa caught a smallish 25 lb. wahoo and inshore there were some jack crevalle, skipjacks & needlefish. Surf fisherman Wesley had a day where his guests caught five jack crevalle and two red snapper.
LOCATION: Sea of Cortez, La Playita, 11.50 and 95 spot.
AVERAGE WATER TEMP: 74 -75 F
WEATHER CONDITIONS: clear sunny skies, seas moderate, turning calm.
BEST LURES: Live